Walking the wall – in honour of real super heroes

At just after 3 p.m. yesterday, people in Belfast’s Great Victoria Street were stunned to see Banana Woman appear on the roof of the Europa Hotel.  She smiled and waved before abseiling down the wall.

She was the last in a long line of superheroes to make this descent.  Various Caped Crusaders and at least three Spidermen had preceded her – as well as a few ordinary members of the public whose inelegant progress down the wall didn’t have quite the same impact with spectators as Banana Woman’s.

In real life Banana Woman is RVH Liver Support Group Vice-Chair Sharon Millen.  Alongside Chairman Donald Cairnduff, she had been roped into the Nothern Ireland Transplant Forum’s charity abseil, part of their year-long  ‘9 GOALS’ project.  Others abseilers included representatives of donor families, transplant recipients and their friends, as well as medical professionals.

The purpose of the day was threefold – to raise money for the Denise Carter Foundation, which funds projects in aid of organ donation;  to celebrate the new life that transplants deliver; and to honour real and generally unnoticed superheroes – the families who agree to the donations that restore life to very ill people.

Back on firm ground, Sharon and Donald were proud to receive medals from Leah Carter.   Leah’s mother Denise passed away shortly after giving birth to her. Her dad Steve set up the Foundation in Denise’s memory after her donated organs had saved or transformed five people’s lives. 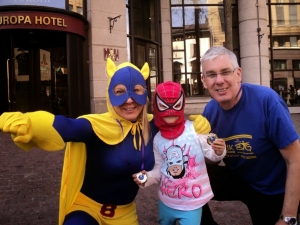 It was a privilege for both of them to represent the RVH Liver Support Group, many of whose members are transplant recipients, at such a memorable and public celebration of the gift of life.