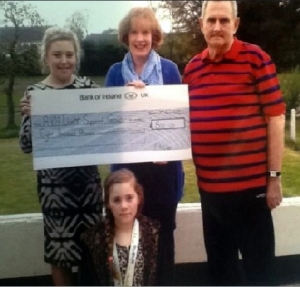 Presentation of cheque to Eileen Hearst

Just over a week later at 7.30pm on 6th November Philip was taken from the Royal Victoria Hospital by ambulance to Belfast International Airport to be transferred to King’s College Hospital. On the journey by air ambulance he was accompanied by a member of RVH staff. He was flown to Biggin Hill Airport where an ambulance took him to King’s.

Philip had asked me to follow him over as soon as possible. I rang King’s Liver Coordinator , Ami. Ami told me to ring at 6 a.m. the next morning to find out if the liver was suitable. When I rang,  Ami informed me that the liver was unsuitable but there was a second liver and they were almost certain that it was suitable but to ring after 8 a.m. So the next thing Philip rang to say he was going to have the operation. I booked the first available flight to Stansted which arrived in London at 2 p.m.. From there I travelled to King’s by train. When I arrived Philip was still in the theatre. I waited around and then Ami came to tell me there was a slight complication with the bile duct which had to be reconstructed but the liver was functioning.

The operation lasted about 8 hours but was successful. Philip was moved to HDU where he was sedated with round the clock care. I was allowed to see him for a short time around 9 p.m.. I was told that if he was alright they would try to bring him around in the morning and to come back at 9 a.m.

When I arrived to see Philip he had lots of wires and tubes coming from him to monitor his progress. He was feeling drowsy and out of sorts. He remained in the unit for 36 hours until he was taken to Todd Ward. While there they changed his medication because he was very confused and not totally aware of what was happening.

During this time he was being accompanied to the toilet when he slipped and fell, breaking his leg in four places. He had to be put in plaster to above the knee. This left him bed bound until he was discharged on the 26th November. Sister Moffett from the RVH came over to accompany Philip on the air ambulance. I was allowed to fly back with them to Aldergrove where an ambulance took us to the Royal. While there he received physio to help him to get on his feet again. He was finally discharged on 6th January 2013. By this time his medication was working and his bouts of confusion had gone. He had come a long way from when I first saw him after the operation and still could not remember much about his time in King’s.

Since then Philip has had to have a drain inserted to remove the bile. It was removed after 6 weeks. Philip would like to say the care and attention he received while in King’s and the RVH was excellent and has made a remarkable change to his health and well being.

He would like to say how grateful he is to the liver donor and their family.