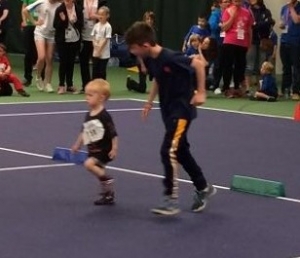 This year’s games were held in Liverpool. They were the biggest yet, with some 750 competitors aged from 2 – 90 and around 1,200 supporters. As ever, liver recipients from Northern Ireland were well represented. Catherine Annesley, Philip Cairnduff, Seamus Cunningham, Wendy Howe, Rachel Chambers, and Sharon Millen competed in adult events while Drew Benson, Ted Carley and Lucia Quninney-Mee competed in children’s events.

Amongst many highlights of their performances were Wendy’s winning a silver media in the javelin, throwing with her left hand after she had injured her right playing volleyball; the fact that Lucia competed at all 10 months after her third transplant, never mind that she won 2 gold, 1 silver and 4 bronze medals in swimming races; and Ted’s participation in the obstacle course and the 25 metres run, just a year on from his transplant. At 3 years old, Ted was our youngest competitor.

On returning to Belfast Sharon and Wendy spoke powerfully to the media about the games as a celebration of life and an appeal from 2,000 voices for increased rates of organ donation. Roughly 15 people per year on the transplant list in Northern Ireland will miss the opportunity to compete in these games because of the chronic shortage of organs.

Traditionally, numbers on the register increase significantly in the months after the games in the areas where they are held. Let’s hope this trend continues on Merseyside in 2016. And that the inspiration of all those mentioned above will help to drive up numbers on the Organ Donor register here in Northern Ireland.