Some 50 members and friends of the RVH Liver Support Group attended the AGM on the evening of 21st April.

The necessary formal business, including the voting in of several constitutional amendments, the approval of the financial statement for the year and the election of the new committee went ahead promptly and smoothly.

Donald Cairnduff’s Chairman’s Report dealt with some excellent work during the year, including the setting up of a Helpdesk in Outpatients that had led to over 700 contacts, a 48%  increase in patient care payments and some robust lobbying for organ donation with MLAs during a ‘platform event’ at Stormont in April 2015.  As ever, those who were bereaved during the year were much in the thoughts of all on the committee, while the efforts of all who raised funds for the Group were deeply appreciated.  (The full report appears in the ‘From the Chairman’ section of the website).

Chief Guest was Dr. Michael Heneghan, Consultant Hepatologist at King’s College Hospital and well known to some in the audience from joint clinics.  His presentation traced the history of liver transplantation at King’s from its earliest days to its current world class status. The potential for world class surgery to save lives, however, was hampered by the unacceptable fact that the UK’s donation rates lagged behind so many European countries.  It was important that the Group and other charities and health agencies throughout the UK continued their advocacy of organ donation.

His presentation was well received by his audience.  Everyone was wished a safe journey home and reminded that they would be welcome to meet again in just over a month, at the carvery lunch in the Seagoe Hotel on Sunday 22nd May. 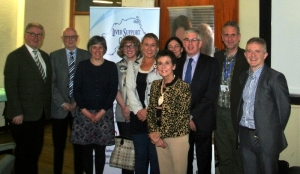