Thoughts on Organ Donation by pupils from Bangor Academy

On 6 March an assembly on organ donation was held for 3rd Year pupils of Bangor Academy.  Roughly 200 pupils heard stories from people who knew from experience what organ donation entailed – as carers, recipients or donors.

I told the story of my son’s life-saving transplant following acute liver failure.

Ruth and Ronnie White, respectively a kidney recipient and kidney donor, talked about their part in the U.K.’s first series of  synchronised kidney transplants that involved 3 donors.

And Mary Sweeney talked about her decision to donate her son’s organs following his death in a car crash.

We were made very welcome in the school, as always (it was our third visit).  The pupils could not have been more receptive.  Below are reflections from a few of them on the stories they heard.

Today we went to an assembly about organ donors.  There was a man who talked about his son being very ill and he had to go on several planes to get to a decent hospital. His son had to put on a cap to cover his pale face so that the woman at the airport would let him board the plane.  He made it to the hospital and got the transplant that he needed.  He lived!

The other story was quite sad.  A mother told us about her son.  He had been out in his car and was involved in an accident.  He was rushed to hospital and passed away shortly afterwards.  Her children had to go for counselling and she and her husband were very upset.

Her son’s organs got donated to people in need and they lived. The woman said she was happy he was an organ donor because in a way he lives on.  I can’t imagine losing a close family member. The pain would be so hard.

I asked my mum about becoming an organ donor.  She said it was a good thing but she didn’t really like the idea of organs being taken out of her children when they have died.  My dad wants to be an organ donor because he thinks it is a great idea and so do I.

We went to a special assembly about organ transplants.  Two men and two women came in and talked to us about how organ transplants had saved their own lives, a family member’s life or the lives of people they don’t know.

One of the women talked about how she needed a kidney transplant.  She explained to us that the doctor came into the ward and said to her that there was a patient in England who needed a kidney.  The test showed that the kidney was the same type as her husband’s. So her husband’s kidney went to this person and another kidney from England went to her.  It saved her life.

There was another man who talked to us about his son and him going to Africa.  The son fell ill and didn’t feel well on the day they were due home.  They managed to get him onto the plane by pushing a baseball cap over his face.  When they got home he was rushed straight to hospital.  Later they found out that he needed a liver transplant.  He got a transplant the next day and is now doing well.

A woman told us a story about her son.  Shortly after he had celebrated his 18th Birthday, he was involved in a serious car accident in Portavogie.  The road was slightly slippery that morning and he just lost control.  The lady’s husband was diverted past the accident but he didn’t notice that it was His son’s car. One of his mates phoned his mum and 999 for help.  Her son died instantly because of the impact of the car hitting the wall.  He was an organ donor and his mum still believes that part of her son is still living today. 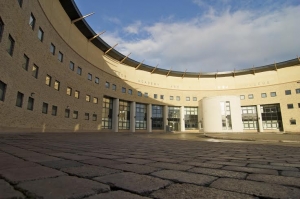 An impressive view of the school

Last Thursday when people came in to talk to us about organ transplants, it was very emotional because they were talking about people they knew who had an organ transplant that saved their lives.

It shows how much you take for granted and how quickly you can lose it.  When I came out of school that day, I told my family I wanted to be an organ donor.